Richland Balsam's upper elevations (above approximately 5,500 feet) support part of one of just ten stands of Southern Appalachian spruce-fir forest. This forest type consists of two dominant tree types— the red spruce and the Fraser fir— commonly called the "he-balsam" and "she-balsam" respectively, although the latter has been decimated in recent decades by the balsam woolly adelgid infestation. Spruce-fir forests are found in the highest elevations of Southern Appalachia due their ability to survive in climates that are too cold and harsh for the hardwood forests which dominate lower elevations. Southern spruce-fir ecosystems resemble ecosystems more commonly found in the northern United States and Canada than in the Southeastern United States.The eastern half of Richland Balsam is protected by the Pisgah National Forest, and most of the western half is protected by the Nantahala National Forest (the exception being the Blue Ridge Parkway corridor, which is maintained by the National Park Service). There is a parking lot and overlook atop Richland Balsam marking the parkway's highest point. 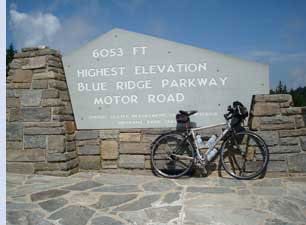